If are into raising chickens but haven’t raised Rhode Island Red chickens yet, then you’re missing a lot. In case you don’t know, RIR has been dubbed as America’s most famous chicken breed. It’s famously known not only for its good looks but also for being excellent egg layers. But still, this breed might not be for you. So before buying one, here is everything you should know about Rhode Island Red chicken breed.

As obvious as it is, the Rhode Island Red chicken got its name from where it was created – Rhode Island and Massachusetts between the 1880s and 1890s. It all started in Little Compton, a small town in Rhode Island. At that time, chicken breeders wanted a chicken breed that is meatier and can lay more eggs than their local breed.

One day, a local breeder named William Tripp bought some Chittagong chickens (Malay chickens) from a sailor from New Bedford, Massachusetts. Interestingly, these chickens from Bangladesh had beautiful feathers and were known for being good egg layers. The result of the crossbreeding was a huge success and was dubbed as “Tripp fowls.”

Later, Isaac Wilbourof Prospect Hill Farm, also in Rhode Island, brought some Tripp fowls and raised his breed of chicken using Malay, Cochin, Java, Shanghai, and Brown Leghorns. With the help of his 5,000 hens, his farm became the world’s first large-scale poultry farm that had exported 1.8 million eggs every year.

In 1898, two professors from Rhode Island Agricultural Experiment Station (now the University of Rhode Island) visited his farm, and he renamed the breed Rhode Island Red. That same year, it got approval from the American Rhode Island Red Club in Boston, Massachusetts. This resulted in a higher yield in terms of egg production.

However, production started to decline during the early 20th century. It was unable to compete with the low cost of transportation and feeds in the other areas, and the public favored the commercial breeds. Today, the Rhode Island Red is listed at The Livestock Conservancy as “watch,” or between “recovering” and “threatened.”

Rhode Island Red chickens (RIR) have a well-proportioned body structure covered by thick feathers that may vary from light rust-colored to a dark maroon or black. They have reddish-brown beaks, red-orange eyes, and yellow legs and feet with four toes on each foot. Some of them may have some red shading on their shanks and toes.

Rhode Island Red roosters and hens can easily be distinguished from each other. Roosters have bright mahogany feathers with shiny black tail feathers with some green highlights, while hens have lighter red shades with some black lacings. Baby chicks are light red with two dark lines on their backs that will eventually vanish as they grow older.

The single-comb variety has rows of spikes while the rose-comb variety is flat and has no spikes. Nevertheless, both of them are vivid red and have the same color as their earlobes and wattles. Interestingly, there are also Rhode Island Red bantams that have similar color variations. However, they are not as plentiful and popular as the bigger ones.

There are also two types of RIR chickens – the heritage and the commercial breed. Heritage Rhode Island Red chickens are bigger and have darker colors than the commercial ones. Nevertheless, they are better egg layers and less broody. However, they tend to be very rare these days. Consider yourself lucky if you have one.

Rhode Island Red chickens are generally lively, lovable, and well-behaved birds. They are also active, docile, and manageable. But unfortunately, they are not advisable for families with small children and other pets. Although they don’t really harm humans, they don’t like to be picked up and are not comfortable with human interactions.

At some point, RIR chickens tend to be pushy towards other breeds. They may not start a fight but they are naturally territorial birds. They don’t mind being smaller than other breeds, especially since they prefer bigger space. In short, they are in the middle of the pecking order. This is because of their inconsistent behaviors, especially the roosters.

This great American breed cannot fly high and far but are smart enough to escape from big predators. In fact, some strains are tough enough that predators avoid them and aggressive breeds don’t mind at all. They also use their dark red color feathers to blend with the color of the environment, making them “invisible.” That’s how smart they are!

RIR chickens are curious and excellent foragers. Most of the time, you will see them very busy scratching the soil, searching for something to eat. They are also adaptable to confinement but they enjoy free-range more. However, their extreme curiosity can sometimes destroy backyards especially if the space is relatively small for them.

Just like other breeds, Rhode Island Red hens are noisy when they are about to lay eggs or while laying eggs. However, they are usually noisier and their screams are creepy but most of the time, funny. In fact, they are continuously noisy and no one knows when they will stop. This is can be annoying to your neighbors, though.

Most strains of RIR hens are seldom broody and others may not go broody at all. Nevertheless, heritage chickens may be broodier, especially those that were not bred for mass production of eggs. On the other hand, both heritage and commercial hens that hatch their chicks are excellent mothers. They take care of them well and protect them at all times.

Just to make things clear, being “cold hardy” means chickens can survive the cold weather but it does not necessarily mean they thrive in the cold. With that, Rhode Island Red chickens can tolerate winter very well, especially the rose-comb variety. The single-comb variety is also cold hardy but those with larger combs are very prone to frostbite.

On the other hand, RIR chickens can tolerate the summer months because their feathers are not too fluffy. Nevertheless, they can be considered fairly heat-hardy chickens. As a matter of fact, they are more heat-tolerant than other chicken breeds that are also cold-hardy. But then, they still need shade on the dust bath and require lots of clean, drinking water.

What and How Should You Feed Rhode Island Red Chickens?

There’s nothing to worry about when it comes to feeding Rhode Island Red chickens. In fact, you are likely to save some money because they are excellent foragers and don’t seem to get tired. This is why they can easily find bites and worms in the soil. But because they are very energetic, they need more vitamins, minerals, and protein.

Laying eggs is the forte of Rhode Island Red chickens. On average, heritage hens can lay between 200-250 eggs a year or 4-5 eggs a week. On the other hand, commercial hens can lay up to 300 eggs a year 5-6 eggs a week! They also start laying eggs when they reach 18-20 weeks of age, and some of them may start as early as 16 weeks old.

And mind you, RIR hens don’t have any weather issues as they continue to lay during summer and winter. This means that they could be noisy all year round. Their eggs are usually light brown and medium-to-large in size and get bigger as time goes by. However, some heritage hens have poorer quality eggs as compared to commercial ones.

Rhode Island Red chickens are double-purpose birds which means they are also great meat birds. Their meat is thick, very tasty, and finger-licking good! However, commercial breeds have smaller bodies than the heritage ones, and therefore, have smaller meat. Nevertheless, both strains grow fast and can easily reach their market weight of 5-7 pounds.

Rhode Island Red chickens have no health problems, whatsoever. They also don’t have a history of a genetic disorder. In fact, most of them are healthy enough to live 8 years and more. But just like other breeds, they can have some internal and external parasites, and they may also suffer from frostbite and heatstroke if properly taken care of.

How to Take Care of Rhode Island Red Chickens?

First of all, you have to remember that Rhode Island Red chickens are very active and always curious. They also tend to be aggressive to other breeds, especially the roosters. Therefore, they need lots of space and privacy. This is not only to protect them but also your flock, especially when they are new in your coop.

RIR chickens can also fly high especially when they panic or feel threatened. This is also why they shouldn’t be joined by aggressive breeds. At the same time, you might also not want to join them with smaller breeds because of their territorial behavior. Therefore, better to join them with sociable breeds with sizes the same as theirs.

Well, you now might be thinking twice about raising Rhode Island Red chickens. But still, here is the summary of their pros and cons to help you decide.

Just to let know, if you will buy Rhode Island Red chicks in an urban environment, there’s a very huge possibility that one or more of them are male chicks. In that case, some areas consider raising roosters illegal. Therefore, you only have 3 choices – slaughter your roosters, give them away for slaughter, or find them a new owner.

To avoid headaches and to make sure you are most likely to get 100% female chicks, ask for sex-linked Rhode Island Red chicks, instead of the purebred ones. Why? Because these crossbred chickens have a significant color difference between males and females. Therefore, you can easily identify the gender of those chicks. Great idea, isn’t it?

In general, raising Rhode Island Red chickens is quite a challenging task. First of all, if you are looking for a family pet chicken, this breed might not be for you. If you’re living in the city and you have lots of neighbors, this might not also be the right breed for you. But most of all, this breed is not for you if you have small children who love to play with chickens.

Nevertheless, if you want lots of free brown eggs at delicious meat, RIR is very ideal for you. Their egg-laying ability is superb and can even be a good source of income. This breed doesn’t require so much feed and effort. Well, you’ll need some extra space and a truckload of patience. But don’t worry; they are worth spending time on. 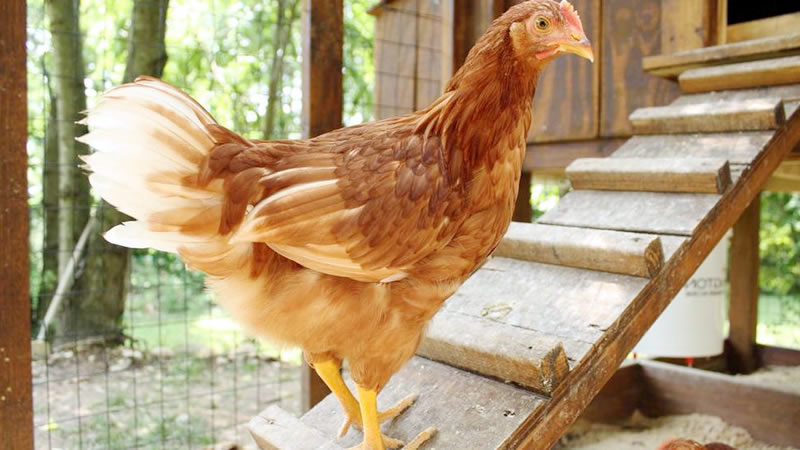