Raising chickens is not always about having a friendly breed. Sometimes, you will encounter some challenging ones.

Take Wyandotte chickens for example. You don’t expect them to be family pets. But of course, they are worth investing in.

To know more about this intriguing but great heritage breed, here is the comprehensive guide that will teach you everything about them

Where Did Wyandotte Chickens Originate?

Wyandotte chickens were developed sometime in the 1870s by four people – H.M. Doubleday and John Ray, both from the New York State, Fred Houdlette of Boston, Massachusetts, and L. Whittaker from Michigan. The first and original variety is the Silver Laced Wyandotte but its origin is uncertain and remains a mystery.

But apparently, there were some speculations that it may have come from Dark Brahma Chittagong (Malay), Shanghai (Cochin), or the Dorking. Nevertheless, many chicken breed historians believe that it is likely to have originated from Silver Sebright. But no, it’s not the British bantam chicken that you know; they just have the same name.

This breed was first called American Sebright. However, it was changed to Wyandotte in 1883. This is to honor Wyandot, an indigenous American tribe that used to live in New York and Ontario, Canada. They later moved to, Kansas, Michigan, Ohio, and Oklahoma. A few of them can still be seen today somewhere in Northern Oklahoma.

That same year, the Silver Laced Wyandotte was admitted to the American Poultry Association’s Standard of Perfection and was described as a “bird of curve.” To help promote and protect this breed, a group called Silver Wyandotte Club of America was formed in 1901. Today, it is now called Wyandotte Breeders of America (WBA).

The Partridge Wyandotte is the result of crossing the Indian Game, Golden Pencilled Hamburg, Golden Laced Wyandotte, Partridge Cochin, and Winnebago. The breed was first called Golden Pencilled Wyandottes but creators chose partridge because it describes the hen’s pattern. There are two kinds of strains, the Eastern and Western strains.

The origin of the Blue Wyandotte is not almost known except that it was created using the Black Wyandotte. So far, there are color varieties that are still being developed but the APA has not recognized them yet. In 2016, the Wyandotte breed was removed from the priority list of the Livestock Conservancy which means it is no longer considered endangered.

The Columbian Wyandotte was created in 1893 by B. M. Briggs of Woonsocket, Rhode Island. He chose the name to honor the Columbian Exposition and World’s Fair that was incidentally being held in Chicago, Illinois that same year. It was the result of “accidental” mating between a White Wyandotte male and a Barred Plymouth Rock hen.

Wyandotte chickens are generally well-balanced birds, which means their legs are spread perfectly and at the center of their bodies. They have broad a breast, while their shank and back are both medium-sized. They also have a short and well-curved neck that is neatly covered with lots of feathers. Their body feathers are loose and very soft.

Wyandottes have bright red wattles and ear lobes, and a flat rose comb with small rounded points. However, females have smaller points than males have. They have a stout yellow shank, and their back has a short space above their shoulders. Their body is compact but wide. A rooster’s tail is carried at an angle of 40 degrees while a hen’s tail is 30 degrees

Golden Laced Wyandotte chickens have an overall background color of either black or dark brown. Nevertheless, their head and neck may seem to be more golden than black. They have golden lacing with black edges on their breast, wings, and saddle. They also have black feathers on their tail with a touch of some golden bay accents

Partridge Wyandotte chickens have dark brown feathers on their body. Females usually have three penciling marks on each of their feathers while males have none. Both of them have black feathers on their tail, at the front part of their body, neck, and breast. On the other hand, their covert feathers have a distinct reddish lacing.

Buff Wyandotte chickens have yellowish-beige feathers all over their body up to their shanks. It’s quite obvious how much effort their originators had spent to perfect this color. You might have mistaken them from Buff Orpingtons unless you notice that they have rose comb and yellow legs. Nevertheless, males have brighter color buffing.

Silver Penciled Wyandotte has a similar color pattern as the Partridge Wyandotte except for the plumage base color which is white. Males have a white head, neck, back, breast, and legs, with some shades of silver. On the other hand, females have a white head and the black penciling of their body starts on the front part of their neck.

Columbian Wyandotte chickens have a white head and their wings have white feathers with some black accent. On the other hand, their tail is directly opposite which means it is black with a white accent. Both genders have white feathers on their body, breast, and feathers. However, the hackles of hens are covered with white-laced black feathers.

How Heavy are Wyandotte Chickens?

On average, a medium-sized Wyandotte rooster weighs about 8.5 pounds (3.9 kilos) while a hen weighs about 6.5 pounds (3 kilos). On the other hand, male Wyandotte bantams weigh about 30 ounces (850 grams) while their hens weigh about 26 ounces (740 grams). They also grow faster than many other breeds of the same size.

How do Wyandotte Chickens Behave?

In general, Wyandotte chickens are gentle, docile, and friendly most of the time. However, they are carefree, mood, and love being alone most of the time. They are not exactly lap chickens and are unlikely to allow humans to touch them at once. Although they are not harmful, you should still be cautious in allowing your small children to play with them.

Most of their strains love foraging but are not as busy as the other breeds. Wyandotte chickens are well-suited in free-range but they are better in confinement. They are unlikely to start a fight with other breeds but they will not back out once an aggressive chicken attacks them. In short, they are in the middle of the pecking order. So watch out!

Wyandotte hens tend to go broody from time to time. They are excellent mothers and will even sit on eggs that are not theirs. However, they are very noisy even if they are not laying eggs and love to chat every now and then. Surely, they are more vocal and boisterous as compared to other noisy breeds. In short, their noise can be very annoying.

Wyandotte chickens are by far, very tolerant in cold weather as compared to other breeds of the same size. This is because of their flat rose comb that is attached very closely to the top of their heads. Therefore, they are not prone to frostbite. Not to mention, their fluffy feathers are great insulators against the cold. So yes, they are very cold-hardy.

On other hand, their rose combs can be a problem during summer. You see, combs also help chickens in regulating their body temperature. But because Wyandotte chickens have very small combs is so close to their heads. In fact, a lot of Wyandotte chicken keepers have claimed that some of their chickens died because of heatstroke.

What and How Should You Feed Wyandotte Chickens?

Wyandotte chickens are big, active, and are therefore heavy eaters. And just other huge breeds, they need lots of vitamins and minerals, protein, and calcium, especially for the hens. Baby chickens should start with starter feed, and then switched to grower and layer feed once they start laying eggs. but the most important of all, they need a good supply of clean and fresh water.

Wyandotte hens are considered one of the best American egg layers. They lay between 200 and 240 eggs a year; That’s 4-5 eggs a week! They can continue laying eggs during winter and some strains are better than others. They may start laying eggs once they reach 6 months. Their eggs are huge and can vary from very light brown (or almost white) to very dark brown.

Wyandotte chickens are bred for dual purposes and are great for meat production. But because they are a heritage breed, you may have to wait for 4 months before they reach their market weight of 6.5-8.5 pounds. Nevertheless, they are somehow faster than most heritage breeds. Also, their meat is delicious, thick, and not fatty.

Do Wyandotte Chickens Have Health Issues?

Wyandotte chickens are known to be a very healthy breed. They have genetic issues and are not prone to serious illnesses as compared to many big breeds. But just like any breed, they can also be infested by internal and external parasites such as mites and lice. Their fluffy feathers may also cause them heatstroke during hotter months.

How to Take Care of Wyandotte Chickens?

Taking care of Wyandotte chickens can be tough if you have a small area. Their moody and territorial behaviors are likely to cause some fighting with other breeds if your coop is overcrowded. To avoid such problems, mix them with friendlier breeds even if you have a big space.

Despite having no feathers on their legs can suffer from frostbite during winter, they have thick feathers on their vent. Therefore, some of their poop might get stuck on them. This can be a problem mostly during summer when they are likely to have runny droppings. Make sure you monitor them closely and clean them immediately.

Adult Wyandottes are not good flyers and therefore, you don’t need high fences especially in backyard runs. However, you should provide them with fresh grass every day. Otherwise, they may ruin your backyard as they love to scratch the soil in search of bugs. Giving them fresh grass is also a great way of entertaining and taming them.

Pros and Cons When Raising a Wyandotte Chicken

As you may have noticed by now, Wyandotte chickens seem to be extreme when it comes to pros and cons. And in case you missed some of them, here is their summary.

As you may have noticed, it’s not easy to raise Wyandotte chickens especially if they will be your first breed. You will need a lot of patience, especially when they go moody. And again, they are not family pets so be careful if you have small children. Their expected lifespan is 6-12 years, and they can reach their maximum age if you take care of them properly. 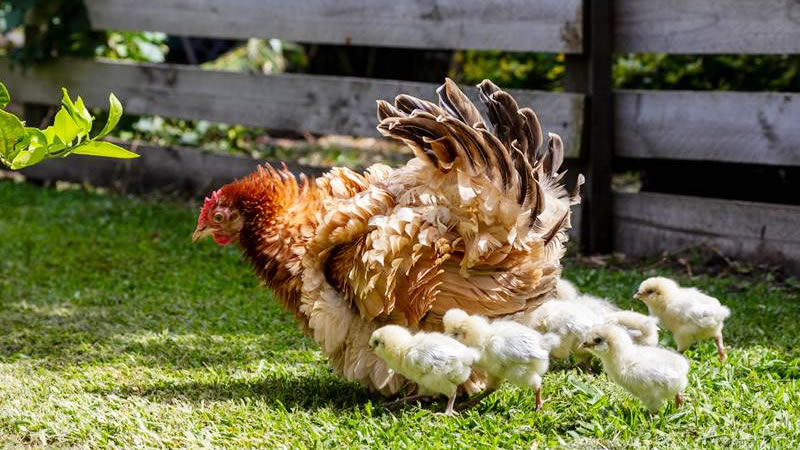