If you are a beginner in rasing chickens, you already probably have some ideas on what they eat. But at the back of your mind, you’re still wondering what foods you should feed them. Well, it does not really depend on what their breed is, but rather what they need based on their age and gender. This way, you can easily know what they should eat.

What do Chickens Eat?

Chickens are not picky eaters and eat anything that touches their beak. You will notice this habit as you watch them scratching the soil and bend their heads toward the ground. Once you look at them closer, you will see them eating some bugs, worms, small animals, and even some small stones. So yes, they can survive without you. In general, they are independent, know how to clean their bodies, and can easily sense danger. They are also alert and can fight against predators. However, they are not really that smart in identifying what’s good for them and what’s not. But because you are now their owner, it’s your responsibility to feed them with a healthy, well-balanced diet.

What Should You Feed to Laying Hens?

While raising your chickens, you are most likely to want them to lay eggs. If you also plan to have chicks, then you will also need at least one rooster to produce fertilized eggs. But either way, make sure that your hens are healthy so that they can maximize their potential in laying eggs. Therefore, you should start while they are still young. By nature, newly hatched chicks can still survive without food and water for about 48 hours. Within this time, they still enough protein that they got from the egg yolk. Once they get dry and becoming to be active, you should now start feeding them with starter feed. At this stage, you should start feeding them with commercial chicken feeds. Nevertheless, they still need extra nutrients especially calcium so that their eggs will have h2er shells. So far, the food that is considered the best source of calcuim for them is oyster shell, which has around 95% calcium. You may also give them other calcium-rich foods or supplements such as limestone, seaweeds, and yogurt. Note, however, that too much calcium is also bad for them and may cause kidney problems. Therefore, you should give them extra calcium only if they need them. Symptoms of calcium dificiency include getting weak, thin and soft eggshells, and sudden reduction of egg production. Also, baby chicks don’t need extra calcium.

Is it Ok to Feed Your Hens with Chicken Scratch and Treats?

Yes, you can but with some restrictions. First, not all chicken scratch is good for chickens. Among those that are fine with them are Fresh banana, broccoli, and green, leafy vegetables. On the other hand, you should avoid giving them avocado (especially the peels, apple seeds, and chicken meat. Otherwise, they are likely to get very sick. Likewise, treats like mealworms are also fine with chickens but they are not considered are real food. They are delicious but they don’t have enough nutrients to chickens. It’s like giving chocolate or ice cream to small children. The rule of the thumb is that you should only give them treats to as much as 10 percent of their daily food intake.

Should Chicken Grit be Part of their Diet?

Chicken grit is not food and therefore, is not part of their diet. But as you know, chickens are not like us humans that have teeth. Therefore, they just swallow their food and let their digestive system do its job. On the other hand, chickens eat some grit because it grinds the food they are in the gizzard, which is that muscular part of their stomach. 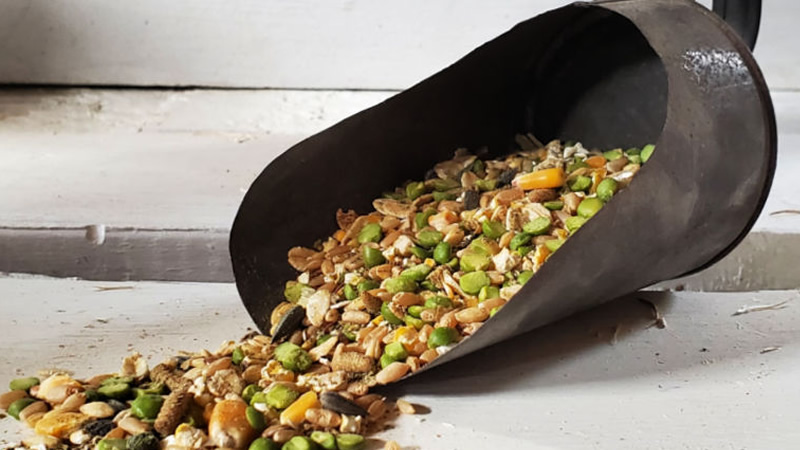